Why I am supporting Germany

This has been a World Cup of firsts.  The first to be held in Africa, the first time a European team has won outside of Europe, in fact only Brazil have won the World Cup outside their own continent and they are out, for Spain and Holland it is a chance to win their first World Cup and if Spain win it will be the first time a team who lost their opening game has gone on to win the tournament.
Each of the final four teams in the World Cup have reasons to believe they can and should win on July 11th.  Uruguay had on paper the easiest run to the semis and have the fantastic Diego Forlán in great form. Luis Suárez may not have the "second Hand of God" but he certainly has a eye for goal and will be missed in the semi.
Holland just defeated favourites Brazil and the excellent Arjen Robben seems to have returned to fitness and, after the exit of Argentina and Lionel Messi, Wesley Sneijder has the opportunity to win the Ballon d'Or award for the best footballer on the planet.  He was instrumental in Internazionale's Serie A, Italian Cup and Champions League winning season, and is currently the Netherlands's top scorer and if they go on the lift the trophy a large part will be down to him.
Spain feel that this time they really can go further than have ever been before and win their first World Cup, they have an incredibly talented team that hasn't yet played the outstanding football we know they can.  They had to fight against Portugal and Paraguay, two teams that had the intention of nullifying the Spanish "tika-taka".
Germany's game plan will not be to negate Spain rather to cause enough problems for the Spanish defence that they won't have to.  This is not a defensive, negative German team but one confident in their own ability to play better than any opposing team.  Thomas Müller has been one of the sensations for Germany and unfortunately will miss the semi-final due to two poor decisions to give him yellow cards.  A new FIFA rule of wiping the yellow card slate clean after the quarter-finals will help the six other Germans who were holding yellows after the earlier rounds.  Germany may not win the title of World Champions but there are many reasons why they should. 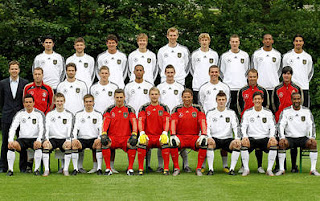 One of the main reasons why I want Germany to win the World Cup is the way the whole German football system is organised.  This is thrown into sharp relief when compared with the bankrupt, unsustainable English system.  There is the "50+1" rule stating that 51% of each club has to be owned by club members.  This prevents the Premier League style takeovers that have brought pleasure and pain in equal measures (compare Abramovich with Hicks & Gillett).  The German system allows the remaining 49% to be sold to private investors.  This has been criticised for leaving German sides unable to compete with their more profligate neighbours from Spain, Italy and England.  A German side may not have won the Champions League since Bayern München in 2001 but they were the beaten finalists this season.  In the Europa League Hamburg came close this year and Werder Bremen even closer the year before.  There are reasons to believe that the German model may not be as immediately successful as the method of spending money you don't have but in the long run it may pay dividends.  Indeed the need to rely on youth development seems to be paying off right now in the World Cup as Germany's team of talented youngsters have scored 13 and conceded 2 on their way to the semi final against Spain.
German football was not always like this.  During the 1990's Borussia Dortmund in particular overspent to achieve their Champions League success of 1997 and continued overspending in an attempt to keep the success going.  The club was saddled with unmanageable debts and they are still feeling the pain of now.  Schalke 04 and FC Hollywood (Bayern München) themselves are other teams that have spent excessively in the past.  One event that, perhaps more than any other, caused a significant re-think in German football was the collapse of Kirch TV deal. Kirch had enabled significant investments to be made and substantial sums to be spent in the Bundesliga.  The sudden withdrawal of this cash cow in 2002 forced German clubs to try other methods of improving their squads.  The cheapest method was youth development and the enforced sales of expensive names cleared a path into the first teams for many young players.
In England the constant demands for more money to buy more players seems to be more and more ridiculous in these penny-pinching times.  If the money isn't there or can't be provided in a sustainable manner then other ways to improve the teams needs to be found.  Many Premier League teams seem unable to grasp this, leading to a dearth in young talent getting a chance at top clubs.  Which further contributed to the England national team's poor showing at this World Cup.  This poor showing is nothing new, they failed to qualify for Euro 2008 and performed poorly at World Cups since 1990, they even didn't qualify in 1994.  Germany's early exit from the World Cup of 1998 prompted a major re-think of training and development and begs the question of when England are going to learn the same lesson.

I am not for one minute suggesting that Spain, Holland and Uruguay manage their football incorrectly and are undeserving of being winners.  In fact Spain and Holland have long shown the value of nurturing young players and teaching them to play the right way from an early age.  This is almost certainly due to financial constraints as outside of Real Madrid and Barcelona there isn't much big spending in La Liga.  Dutch teams have never spent big, Ajax in particular are famous for their ability to train young players to play the right way.  I am also not suggesting German football is perfect but it certainly represents a more sustainable model than the one currently prevalent in England.   For that reason and the fact that they have played the best football in this tournament they have my support for the rest of the World Cup.
Posted by Unknown at 4:38 PM