OK, this is a different topic but something that is very personal to me and something that I have wanted to write about for some time.  After a year in Central America we are leaving Costa Rica in one month so I wanted to do this before we left. 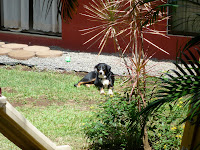 As most of you know, Steph and I adopted Rocky who turned up outside our house in January this year.  She was around 2 years old and didn't look like she had spent much time on the street and she had recently had a litter of puppies.  One of them was still with her, probably around 6 weeks old.  Rocky is coming with us to the US next month, she is a lucky dog!  Her pup was taken in by our neighbours but unfortunately she disappeared a few weeks later.

Rocky's story is not unusual here in Costa Rica, she was not born on the street, she probably had a home and an "owner" but for whatever reason (probably because she was pregnant) Rocky's owner decided they didn't want her anymore and so she was abandoned near our house, with her pups.  God knows what happened to the rest of her litter.

I am well aware that animal cruelty exists in every country and I am also fully aware that I may sound like a well-off Westerner lecturing people who have far worse problems to worry about than the welfare of animals.  The issue is not about money, particularly in the Central Valley area of Costa Rica, and particularly where we live.  In the San Jose/Escazú/Santa Ana/Ciudad Colón area most people live a relatively comfortable life.  Costa Rica ranks 54th in the UN Human Development Index, with a status of "High Human Development" above countries such as Saudi Arabia, Turkey, Brazil, China, South Africa.  For a developing country Costa Rica boasts an incredible adult literacy rate of 95.9%.  The government has long invested money in education here.  The military was abolished in 1949 and much of the money saved was spent on free education and health care.  Costa Rica is also one of the largest recipients of Foreign Direct Investment per capita in Latin America.  For sure there are areas of extreme poverty here but not where we live.  It is not about money, or education, or development but about attitudes.  I do not want to tar everyone with the same brush, there are many responsible dog owners here in Costa Rica, but the number of abandoned dogs near our house is heart-breaking.  Seriously last week there was a different dog every day in the street outside. 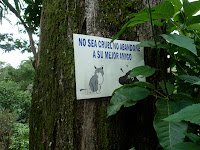 The photo on the left was taken about a 5 minute walk from our house (the sign says, "Don't be cruel, don't abandon your best friend").  The fact someone felt there was a need for this sign tells you something.

As well as abandoning animals, there is another problem here.  Many people think it is ok to have a dog and let it out of the gate in the morning and leave it to run around the neighbourhood unattended all day.  If the dog comes back at night, then good.  If it doesn't then you can get another cute little puppy from the shop and try again.  As this article (in Spanish) says many people think they are dog owners but really all they do is give their dog some food and a name and leave the dog to fend for itself.  Many of these dogs roaming free haven't been castrated or spayed, meaning the street dog problem continues.  The above article quotes the director of ANPA (Asociación Nacional Protectora de Animales) in Costa Rica as saying that many street dogs have owners but they let them run loose.  Animals need more than just some food scraps and somewhere to sleep.

As far as I know there is one animal refuge in this area, the Refugio de Animales in San Rafael de Heredia, who take in dogs and cats that have been abandoned and they also run outreach programs encouraging people to castrate or spay their animals.  Changing attitudes is a slow process.  They need all the help they can get.
Posted by Unknown at 7:03 PM

Wow, it's a good account of the street dog situation here in Costa Rica. And it really is heartbreaking. I wish we could take them all home! But at least there's one less dog on the street now :)

Hey! I agree, this is a really well written and passionate account of the issue, which seems especially present down by Villa Cafe. Thanks for writing more on this!

Thanks!
I feel sorry for the guys left behind too...